You are here: Home / Articles / Meeting Steven Pressfield (follow-up to How To Find A Mentor)

Some people asked for more examples in this post about how to find a mentor; specifically, they want to know how to figure out how to provide enough value to a prominent person to be able to even get started on a relationship. I could go find a bunch of examples involving other people, but instead, one very specific one popped up in my life. It’s the opposite of what most people are expecting. Instead of showing how someone came to me to establish a relationship, I’ll show you how I approached a hero of mine to establish a relationship: Steven Pressfield.

Steven Pressfield is, in my opinion, one of America’s best living writers, and his writing has been hugely impactful on my life. My Most Influential Books has his on it because I credit that book, more than anything else, with helping me understand what it meant to be a professional writer. His other books have been incredibly influential on me as well, especially , , and (I grew up in a single mother household and those three books were part of how I learned what it meant to be a man). When I think about it, an astonishingly large amount of what I think about responsibility, manhood, art, and hard work, I give him some credit for helping me to learn.

So yeah, you could say I like the guy a lot. And of course I’d love to know him and be friends with him and maybe learn something (else) from him, but I never really had a reason to contact him or invite myself into his life, until I read on his blog how he was going to be publishing the sequel to The War of Art, called Turning Pro, AND he was going to do it through his own publishing imprint. Now, betting on yourself is something I know a lot about, especially in the publishing arena. This was a golden opportunity to contact him, because now I had real value to offer: information.

[Plus, I had another in: My old assistant, Ian Claudius, owns the domain TurningPro.net. In fact, Ian started blogging under that domain right before he started working for me. I told him to read The War of Art, and he did, and he internalized the message, and decided to apply it to his life. The blog at TurningPro.net was his way of forcing himself to do something every day, to demonstrate his performance and understanding. That original blog is, in fact, the very reason I hired him to be my assistant–it showed that he was persistent in the face of failure, something that cannot be taught (I can teach you information, I can’t teach you desire). He’s since taken that blog down and replaced it with this, because well–he turned pro (once you’re a pro, you take a different approach than when you’re trying to become a pro, but that’s a different post).]

I sent this email to Steven Pressfield:

Let me start this email by offering you something that I think you might find valuable:

I own the domain TurningPro.net. My old assistant Ian used to use it for his personal blog which he’s now moved to a different domain, and it’s now just sitting there, unused. Since you have a book coming out soon called “Turning Pro,” I thought this domain might be something you’d like to own. Ian and I are both huge fans of you and your books, and we’d be happy to transfer to you for nothing, just as a show of appreciation for all we’ve taken from your writing.

There is another reason for this email though. I also read your blog, and of course I’ve noticed you talking about doing your own publishing endeavor. I think I can help you with that. Let me explain:

[I redacted a bunch of boring ‘how the sausage is made’ publishing details here, basically I just told him precisely what I know how to do that would be useful information for him to have].

Anyway, if I am right and you are going a route similar to what I did, then I’d love to sit down and discuss all of this with you and your agent. I think my experience might be of use to you as you start down this path. And since I am going to be doing this in future again, I’d love to trade notes and ideas with you, and hopefully make both of us are a little bit smarter at this new way for authors to publish.

Is this of any interest to you and your agent? Regardless, the offer to transfer TurningPro.net stands, and Ian and I will remain steadfast fans.

Simple, clear, and to the point. He responded right away, and we set up a meeting for a week later.

I know what you may be thinking: “Yeah, but you’re Tucker Max, you have a ton more to offer someone than I do, I’m just some schmoe.”

Yeah, you’re right. But so what? So because I have more to offer someone like Steven Pressfield, that means you have nothing to offer? Bullshit. Leverage what you have. Or better yet, create something to offer. Figure out what the person needs and do it for them. Understand who they are and what they want in life, and you’ll see where you can fit in (if at all–there is no guarantee of a place for you). Like I said in the original post, if this is a route you want to take, it’s not going to just come to you. You have to go get it. Pick out the people you like the most and you think have the most to offer you, then learn about them and figure out what you can offer them. It’s not going to be much, but oftentimes it doesn’t need to be a whole lot. And show them that not only do you have something to offer them, but that you aren’t going to waste their time and that helping you is a productive thing for them to do.

Anyway, the meeting went great. I’m not going to write about it now, because Steven gave me an advance copy of Turning Pro, and I will write about meeting him when I write my review of that book (which will go up in when the book releases, maybe two weeks or so from now).

Spoiler: Turning Pro is fucking awesome, just as good if not better than The War of Art.

But I will show you this picture. I’ll admit, I got a little fanboyish and brought some books for Steven to sign. He was more than gracious about it though, and put possibly the greatest inscription I could ever imagine getting: 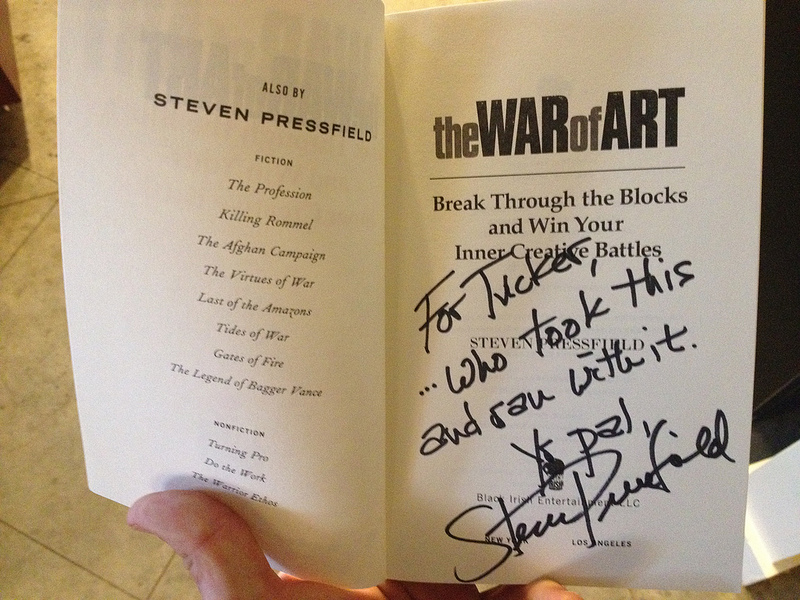