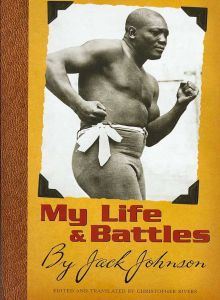 What’s it about?: The autobiography of Jack Johnson, as serialized in a French newspaper and translated decades later.

Tucker’s Opinion: If you don’t know anything about Jack Johnson, let me sum him up for you: He’s one of histories most amazing real life bad asses. I can’t really sum him up or talk much about him without giving the book away, but basically this dude grew up in the most preposterous, destitute poverty in Galveston, Texas, and went on to become arguably the greatest heavyweight fighter of all time. Oh, did I mention he taught himself boxing…by taking professional fights! And not only that, but this man stood against the incredible, almost unbelievable racial prejudice at the time, socially and economically. I could write thousands of words about him, but just read this book (and I would read some biographies, which are far more informative than just this book). Jack Johnson is one of my personal heroes, and this is his story in his words.

The book doesn’t get a 10 for a couple reasons. First off, it’s written in that weird 19th century style that is over-dramatic and effusive with adjectives and annoying to read. Also, even though Jack Johnson is amazing, at times he isn’t really honest with himself about certain things; not that I blame him for being defensive and angry, god knows I would be too if I was him and had to face the bullshit he had to face. Furthermore, he has another autobiography written in English called In The Ring and Out (which is now out of print) that is better (I’ve read it and will post the review eventually), and of course the great biography of him, , which anyone interested in Jack Johnson should also read.

Notable Quotes (as marked by Tucker):

My father got home. We sat down to dinner and as soon as he had lifted his head from saying grace, my mother said: “Do you know what our little wretch Jack did today? He got into a fight!”

“A fight!” said my father, slowly lifting his eyes from his plate. “With who?” “With Jackie Morris.”

My father looked at me with a smile masquerading as a grimace and said: “Yes, I saw Jackie this evening in his yard when I passed by his house. He did look like to me like he had taken a beating.”

That was all and so I began to breathe more easily. After that day, I often had animated disputes with boys who were older and bigger than I was and my father never paid any attention to it. If I had a son, I would certainly not want him to spend his time fighting. But if he were attacked and didn’t give the attacker a beating in return, I would be the one to beat him when he came home. Fights between kids give them self-confidence and are the first lesson in the struggle for survival.

After that, I had a number of disputes with other boys, for trivial matters that seemed very important to us. Sometimes it had to do with a nickel, sometimes with an argument between the two of us. Anyone who remembers his childhood knows that in a group of kids, there are always battles going on. But I can say that while I never avoided a fight, I never sought one out either and that I never punched kids who were younger and weaker. Consequently, I was liked by everyone.

Nonetheless, I was coming along more quickly than I was aware of. All the sportsmen in the region knew who Jack Johnson was and they were all talking about him. Some of them weren’t saying good things. I am sure that they didn’t understand me. It would be a long time after that before they did. They reproached me for many faults. I may have deserved some of their criticism, but they were wrong in much of their evaluation of me and of my skill as a boxer. I wasn’t aggressive enough, according to them. I stayed on the defensive too much. It took me too long to make my move. I couldn’t explain to them that what I was doing was learning how to box. For me, it was an ongoing lesson and I learned from all my opponents, big and small. When I was in the ring, my opponent was a teacher. I would study his every move, like you study the movements of a machine. Most of the men I fought had the advantage, which I didn’t, of having had lessons from a scientific boxer. I had never had enough money to pay for a teacher. What little I knew I had learned from the tough and painful school of hard knocks.

If I had explained all that, people would probably have made fun of me and said that I was a typical yellow nigger. The folks who came to see me in the ring thought that I was there to hit, to do damage, and to take my opponent out. They would have said that they came to see me fight, not take a lesson. No one would have thought that this big, poor nigger was in the process of methodically learning his craft, with the firm intention of increasing, little by little and through a tough form of education, his knowledge of the sport of boxing. I followed the plan I had set out for myself, without worrying about criticism from people who preferred to think that I was an animal without intelligence, making his way as a fighter thanks only to his brute force. As for me, I thought that each bit of progress was a step in the right direction, the direction of a career that I pursued tirelessly.

I wasn’t in very good condition; it’s hard to be in good shape when you haven’t eaten for several days. Little by little, I went to work in earnest and I did the best I could. It took me twenty minutes of hard labor to convince that boxer that he had made a serious mistake by agreeing to fight me. By the time he gave up, I admit that I had taken some terrific punches. The crowd was enormously pleased with the battle, the benefits of which fell to me alone, by the way. When they gave me the proceeds of the passing of the hat, I realized that I had come into possession of a lump sum of $75, almost all of it in silver coins.

But there was something more important to Jack Johnson than beans. I wanted to travel in softly upholstered train compartments, not cattle-cars.

All these experiences served me well, though. And I cannot tell you how happy I am today that I had to defend myself against adversity and know poverty as intimately as I did. I’ve been around the world three times and round the United States many more times than that. Most of the time I had money but how many times did 1 not have a penny to my name! Now that 1 have managed to clear a path all the way to the world championship, all those experiences—many of which were terribly painful at the time—really seem very funny to me. I like to talk about them when I don’t have anything better to do.

On the first day of January 1907, I sat myself down and resolved not to get back up until I had developed in my mind a clear idea of the current state of Jack Johnson. First of all, I tried to see myself as others saw me and not according to my own personal point of view.

First of all, boxing should be a business for me. I am in this profession to get as much out of it as I can and my personal likes and dislikes have nothing to do with it, no more so than if I owned some sort of business. So I need a plan for making my fortune. Of course I am happy to have built up a record like mine at my age, but that was due to my natural abilities and I would be wrong to give myself too much glory for it. 1 admit that there was little merit in taking down some of the men I fought, but when I get it in my head to fight an opponent, neither his size nor his skill ever stops me. To be sure, I’m fool enough to rush at a man and try to put him to sleep with the first punch, on the pretext of finishing things in a single round. I generally believe that it is wiser to drag things out. I consider that much of my success as a boxer resides in the fact that I always have a very accurate idea of what my opponent can do and, simultaneously, a plan well thought out in advance for my own actions. I have rarely faced a man across the ring without predicting how he was going to conduct himself. One of the rare mistakes I remember having made was during my match with Sam Langford, when I let him land a punch on my jaw that very nearly sent me off to Dreamland.

The man who can knock me down at will has yet to be born. What happened to those prognosticators who thought I was a little chicken next to their great champions? Ask any of the men who have fought me how easy it is to put me on the canvas. The truth is, Jack, you haven’t been stretched out for a full ten seconds since yon were a novice. And yet you’ve never had to give your all. Each time you’ve won, you’ve always held a little something back, so that no one has ever taken your true measure. If people did see what I can do, there would be some mighty surprised faces around the ring! They would open their eyes good and wide if they ever saw me play the game all-out!